Illinois Philharmonic Orchestra (IPO), under the direction of Maestro Stilian Kirov, is excited to announce its 45th anniversary season. The 2022-23 season features some of the world’s most celebrated musicians with cellists Oliver Herbert and Inbal Segev and multiple appearances by Grammy award-winning baritone Bill McMurray, soprano Kimberly E. Jones, and the Chicago Community Chorus.Additionally, IPO will premiere two works – the Midwest Premiere of Vijay Iyer’s Human Archipelago (following its unveiling with the London Philharmonic and its American premiere with Oregon Symphony) as well as the world premiere, co-commission of Augusta Reed Thomas’ Gwendolyn Brooks Settings, complete with an accompanying performance by the Anima – Glen Ellyn Children’s Chorus.

Another highlight of the new season will be the April 15, 2023, concert Soaring Strings: An Orchestral Celebration of Matthew Mantell.  Taking center stage to celebrate Mantell, a longtime principal violist with IPO who lost his battle with cancer in 2019, will be his student Matthew Lipman along with Mantell’s wife and daughter, Emily Lewis Mantell and Sonia Mantell.  Lipman has been praised by the New York Times for his “rich tone and elegant phrasing.” Sonia Mantell is a cellist with the Minnesota Orchestra while Emily Lewis Mantell is a former principal and current section cellist with IPO.

“We are very excited to unveil this special Illinois Philharmonic Orchestra 2022-2023 season,” states an excited IPO Music Director Stilian Kirov. “We continue to present exceptional masterpieces to our audiences and our emphasis on performing outstanding American music and works by a myriad of composers in an effort to be more inclusive is stronger than ever before! I look forward to welcoming our IPO’s audiences to this exceptional musical journey next season and to embrace our inspiring programs together.”

“IPO’s 45th anniversary season is a celebration of the multitude of artistic voices that have, over generations, inspired, entertained, consoled, and touched humanity. We are excited to add to this impressive cannon of top-notch music with exciting premieres and many of the world’s very best guest artists. We look forward to an exciting 2022-23 season of sound!”

During the 2022-2023 season, IPO will perform six magnificent classical concerts and one holiday concert at their home venue: the 1,100 seat Ozinga Chapel at Trinity Christian College in Palos Heights. In addition to its regular concert schedule, the orchestra performs a myriad of educational youth offerings each year. In total, IPO reaches over 10,000 individuals in the Chicago Southland, 3,500 of whom are served through Meet the Maestro, Artists in Schools, Pre-concert Performances, and additional community engagement programs. IPO also performs an annual four concert summer chamber series, IPO Summer @ Olympia Fields Country Club.

Season subscriptions are available now by calling 708.481.7774. Individual concert tickets will go on sale at a later date this summer. 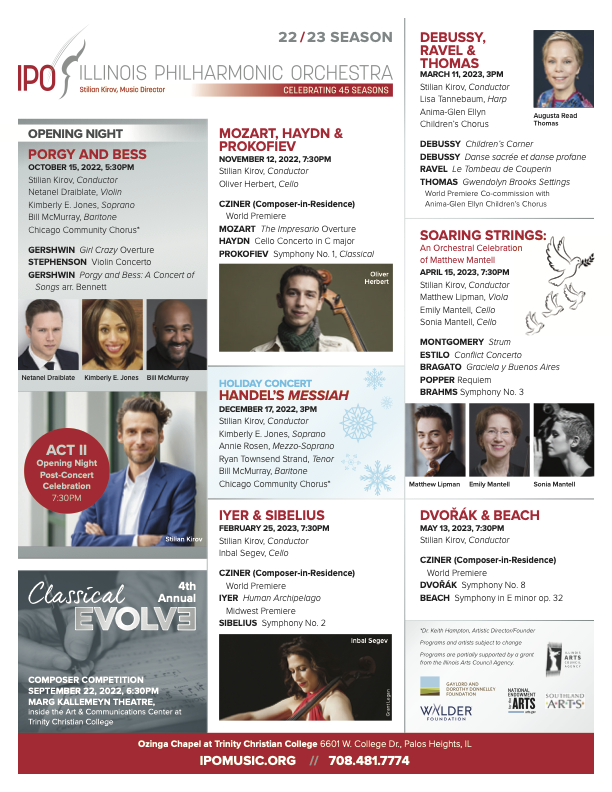